The Best Grape Story of All Time: Carmenère

14 Sep The Best Grape Story of All Time: Carmenère

Part of the reason I love wine is that every grape has a story. Whether it be that the grape has been native to an area for centuries (like Sangiovese in Tuscany), or found to be the love child of some other popular grapes (Cabernet Sauvignon is the illegitimate kid of Cabernet Franc and Sauvignon Blanc), every berry has a legacy. I don’t like to play favorites in wine, but I do have a favorite grape story and that is the story of Carmenère.

Yeah, I know it’s off the beaten track and you may never have heard of it or seen it, but if you start ‘trolling the Chilean aisle you’ll see a bunch of Carmenère on the shelves. It’s become a signature of sorts for that country, so I’ve been sent a ton of it from the Wines of Chile (including the wines that I’ll talk about later and for which I thank the organization for!).

How did this ancient grape, assumed to be the progenitor of Cabernet Franc and therefore Cabernet Sauvignon, that was used in Bordeaux as a blending grape for hundreds of years wind up in Chile? That’s why I love the story. It’s meandering and cool.

Wine dorks who study this stuff believe that Carmenère is originally from Spain, but was brought to Italy by the Romans (who were the disseminators of viticulture to all of Europe), where it was blended with Sangiovese in Tuscany. Through Roman transport, the grape made its way up to the Left Bank of Bordeaux, where it lived fitfully, temperamentally, and as a thorn in the side of growers until a one-two punch of the fungus oidium and the vine mass-murderer phylloxera hit the area in the mid-1800s and killed off most Carmenère vines.

After the disaster that was the phylloxera epidemic, growers had to pick up the pieces. They replanted their faves on pest resistant American rootstock, but Darwinism took its course. Vignerons (as they are called in France) only grafted the vines that were worth growing because they had the strength to survive – Cabernet Franc, Cabernet Sauvignon, Merlot, Petit Verdot, and Malbec. Carmenère really wasn’t replanted. It was assumed extinct, and most growers were excited about that — who needed the headache?

So WOULD have ended the story of Carmenère, but then something kind of weird happened.

In the early 1990s, Chile — whose French, Italian, and Spanish immigrants had been making wine derived from European vine cuttings for more than 150 years outside of the capital of Santiago — realized that their Merlot tasted really “distinctive.” I’m sure you can guess why. About 50% of the what was going into Merlot was not a Merlot clone, as winemakers believed, but Carmenère! In 1998, officials finally finished a DNA study and the Chilean government recognized this unique grape.

It’s amazing that the Chileans didn’t discover this sooner. Carmenère has a VERY distinctive flavor. Whereas Merlot is kind of low key and soft, Carmenère tastes like green pepper and has a sharp spiciness that is not really found in Merlot. The grape is named so for its crimson color — it is really dark. It tends to be medium bodied with smoky, spicy, and earthy aromas. It’s no shrinking violet. This wine is bold, best had young, and, frankly, can be a tough wine to drink if it’s not made well. 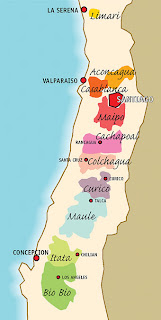 Given all that, you’ve got to give Chile props for taking this unique grape that they saved from extinction and for making a go at creating a market for it. They’ve never had a problem growing the stuff — isolated from the rest of South America by the Andes to the east and the Atacama Desert to the North, and with sandy soils and low rain — Chile is an unwelcome place for pests and fungus. The delicate grape that was heartache in France is hearty trooper in Chile. And, frankly, in the right hands the wine can be nothing short of spectacular — like Merlot on steroids — but in the wrong hands — blech.

That’s been my problem with Carmenère. I’ve tasted many and I have found two profiles — something approaching nirvana in a rich full wine, and then a mothball-like, sulfur, green pepper mess that reminds me of a fast-food joint’s salad with under-ripe tomatoes, iceberg lettuce, and past-its-prime green pepper (and a healthy dose of chemical spray). I’m hoping that Chile will nail the former and eliminate the latter, but it remains to be seen.

Funny enough, the two wines I tasted from the same producer reflected the two styles above. I hate to say that price is an indicator of quality, but here there was dramatic difference between these wines and $10 separating their price points. Both of these wines come from Viñas Montes. Started in 1987, the company is a big player in Chilean wine, importing to 75 countries around the world.

Color: This wine is crimson. It was nearly opaque and very inky, I expected lots of flavor and low acidity due to its more purple color.

Smell: This was exactly the style of Carmenère I don’t like. It smelled like vodka and green peppers. Even after decanting and drinking the next night, which I find is great for smoothing the edges of Carmenère, a real vegetal note dominated, with some smoky and plum tones. I am really sensitive to the green pepper smell, and I just couldn’t get past it here.

Taste: The taste was similar to the nose. Again — the green pepper dominated the wine with a bit of plum and vanilla from the oak aging. The wine had pretty astringent tannins and a very hot quality — the alcohol burned my esophagus going down. The plum/blueberry/cinnamon/vanilla bean finish redeemed the wine slightly, but the green pepper notes just killed it for me.

Drink or Down the Sink?: I’m voting down the sink on this. We didn’t finish the bottle because it just wasn’t that intriguing. For $15, you can get a great Malbec, Shiraz, or a decent Cabernet. Skip this one.

Wine 2: Purple Angel by Montes (before I review this — we opened this one night and drank it

Color: If Carmenère means crimson, then this wine lived up to the name. It’s so purple it’s almost black with a light, watery maroon rim. The wine stains the glass when you swirl it and the legs (the wine as it separates into water and alcohol — the legs are the alcohol dripping down the side) were gloppy — this wine has 14.5% alcohol and it showed.

Smell: I like this wine as much as I disliked the Montes Alpha! Rich plum pie (plums, cinnamon, and a TON of nutmeg) dominated the nose with a touch of black pepper. The wine’s prodigious alcohol made my nose tingle — I even sneezed once from it. There was a touch of green pepper on the nose, but nothing like the Montes Alpha or other Carmenères I’ve had.

Taste: The first impression was plum and dark raspberry with mint, oregano, and nutmeg. There was a chocolate covered cherry quality — rich and soft and a little bitter, like dark chocolate. The wine had a wet earth flavor. It kind of smelled like a raspberry briar, if you’ve ever smelled that — kind of wild and fruity. The mouth-drying tannin was prominent but totally balanced. It was similar to 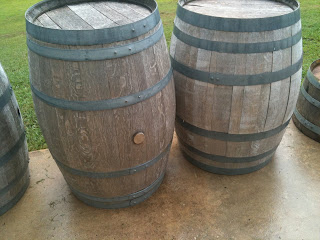 a high quality Zinfandel. The wine was aged for 18 months in French and American oak. Usually American oak is looked down on for it’s very strong character, but I think in this case it may have helped temper the wine and added more chocolatey, minty flavors that are highly desirable. This wine is what I think all Carmenère should taste like.

Drink or Down the Sink?: Drink. I guess in this line of wines price does count, although that is not always the case with Carmenère I have to admit that I was a bit put off by the huge, heavy bottle (sometimes wineries use heavy bottles for cheap stuff to make it seem better so I’m wary of the ploy) but the wine delivered on quality tenfold. I would drink this again and it confirms for me that Carmenère if from the right region and in the hands of the right winemaker has a very bright future and could be Chile’s big differentiator moving forward.

How to Shop For a Wine Similar To The Purple Angel: I wish I could tell you a magic bullet for finding Carmenère that tastes like the Purple Angel and not like the Montes Alpha. A few months back I did a tasting with the Wines of Chile and tasted 8 Carmenères in a row all at different price points. The only common thread I found was that the wines I liked best were from the Colchagua

Valley as opposed to other places. Further, I think the addition of American Oak to the French oak in aging helps mellow the wine. You can look for that on the back label or on the internet and hopefully that will help you find great wines too. That said, you may need to try a few different producers before you have the wine. Once you find a good one, take note — it can be your touch point after you’ve tried a few of these and are ready to throw in the towel on the variety altogether!

I’d love to hear from you! Let me know your thoughts!