101 on Walla Walla, Washington in the Northwestern, U.S. (A Very Amazing Place)

16 Apr 101 on Walla Walla, Washington in the Northwestern, U.S. (A Very Amazing Place) 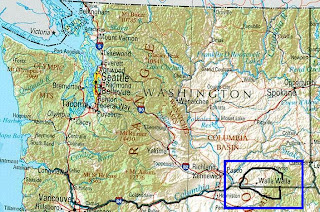 What can I say about Walla Walla, Washington? That the name means “rapid stream”? That it’s named for the people who lived by the river, which is also called Walla Walla? That it’s a cute college town (Whitman College, a liberal arts school is here)? That it’s a big hotbed for sweet onions, wheat, and fruit…including grapes?

Yeah, I could say all that. Or I could say that I’ve never met a nicer, more collaborative collection of wine people (nary a snot in the bunch), or a group of wines that was so consistent in quality and expression of a place.

There is something special going on here and the smiles, pride, and great wine at every turn made me feel good about being in an industry that I often feel is dirty, nasty, and condescending. If you want to see the good side of wine, Walla Walla is where to head.

Getting There…
M.C. Ice and I drove 5 hours from Seattle to get to the southeastern part of Washington state and had no clue what we’d find.

It was Wine for Normal People takes on Lewis & Clark (explorers from the 1800s that scoped this area, if you’re not familiar with US history).

Ok, maybe not, but I’ll warn you: heading to what most people consider to be the highest quality area of Washington state is going to take you far afield. It’s worth your while, but worth noting.

After leaving the Seattle monsoon, we traveled through gorgeous snow-capped mountains, and then miles and miles of desert until we passed our 789th cow and 451st horse and Walla Walla appeared on the horizon. Amidst the chickens, donkeys, goats, and fast food chains, emerged a fabulous town full of tasting rooms and amazing vineyards. This place was unlike any other I’ve been to, and I was happy to be there.

What makes Walla Walla different? Some history, growing conditions, and the wine character

As I heard from a few people, the standard of excellence here and the dedication of all the winemakers, who seem to know each other and share information freely, is as consistent as the high quality of the wines.

As one person told me, “this is an area that developed around a quality standard, not around a growing region.”

True story, because although viticulture started here in the 1850s, it wasn’t until the 1970s and early 1980s, when a small, very prestigious winery called Leonetti launched with a bang, that Walla Walla started gaining a reputation as a region to watch.

Although a lot of the winemakers truck their fruit from other places in the Columbia Valley (see the post on Woodinville, WA to understand why I am so confused by this practice) and especially did so when they first got started, these days the vineyards in Walla Walla are the ones producing the top notch wines.

These wines have a distinct dirty flavor (and I mean that in a great, fabulous way)  that has a true sense of place — there is no doubt that this stuff grew in the ground.

I gotta be honest: I expected big fruit bombs with high alcohol. But what I got were tasty, balanced, spicy, earthy wines that have a fresh acidity and mild tannin.

As I spoke to winemakers and folks in the tasting rooms, I learned that although the alcohol is high because of the hot days that raise sugar levels in the grapes, the acid and tannins kick ass because the nights are really cool. Those diurnals (temp swings), and a long, very sunny growing season give the wine dimension and some crazy great flavors.

Water is a huge issue for winegrowers in Walla Walla, given the valley is kind of a desert surrounded by mountains, but winegrowers irrigate from the Walla Walla and Columbia Rivers and it works for them. They’re thrifty with water, and have total control over how much goes in. They can let the grapes struggle and pick up the flavors of the land without having to worry about Mother Nature throwing in a storm and jacking things up.

All that is special but I think the real difference in making fabulous wine is even nerdier than those factors. I don’t usually dork out on soil  but I’ve got a good story so, here goes…

A Little Ancient History: The Missoula Floods and why they matter to wine today

It all goes back to the last ice age…

Imagine a lake that’s the size of one of the Great Lakes in the central US (they are huge). It’s hanging out, dammed up by a huge glacier. And then periodically, a part of the dam melts. The water rushes out with huge force (at about 80 mph/130 km/h) and pummels all the surfaces in its path, carving out valleys, chopping up hills and mountains, and depositing new soil through Walla Walla, the Columbia Valley, and even down to the Willamette Valley in Oregon. Now you’ve got a new landscape. The dam freezes again but this process goes on and on for about 60 years.

Voilá! 13,000 years ago this massive flooding made lots of different slopes and elevations for growing different grapes and growing them well. And just as importantly, four main soil types evolved in Walla Walla that I think are the key to the flavors in this area (thanks to Deborah at L’Ecole No 41, which I will post on separately, for the lesson!):

1. The most common is wind blown loess (after the water from the flood dried up, stuff from the river bed blew around and settled), which creates powerful, rich reds.
2. Ancient flood silts add spiciness to the wines
3. Basalt produces powerful, ageable reds
4. Vineyards in the Rocks are similar to the soil and set up in Châteauneuf-du-Pape (in the Rhône Valley, France),  where large stones absorb and then reflect heat onto the vines during the day and continue through the night, creating warmer nighttime conditions. This creates ideal conditions for Rhône varieties like Syrah and Viognier.

I’m not lying when I say that more than any other US region, I could really taste the difference in the soil types — especially wines from vineyards with wind blown loess and from the rocks. If you’re having a hard time getting your head around terroir and you can’t get to Burgundy (the mecca of terroir), tasting a few Walla Walla wines will help you understand the concept. For a small valley, Walla Walla has a LOT going on.
________________________________________

What’s it Like in Walla Walla? Quick Travel Tips

We spent about 3 days in Walla Walla and loved it. If you’re going to go, you need to get yourself out to the vineyards and see what is really happening there. They’re mainly south of town, even over the Oregon border (the area is based on soils/geology, not political boundaries).

The town has a great combination of tasting rooms that are surrounded by vineyards and those that are on the main streets of town with just a storefront. I loved getting out and seeing the vines and getting a sense of how the valley evolved, so if you’re pinched for time but going to be in Walla Walla, I would highly recommend hitting the wineries south of town that are in the thick of grape growing.

We had more time so we got the opportunity to do a little bit of everything. We stayed in the fabulous, historic Marcus Whitman Hotel and even met the owners who were as down to earth as everyone else in Walla Walla. The bartender, Silas, was a very cool dude who knew a ton about wine too. The location gave us a really delicious breakfast AND walking access to a bunch of tasting rooms and restaurants. None of the vineyards or wineries was more than a 15 minute drive around the town.

In the next week I’ll be posting on the wineries we visited. I’ll spotlight some and give short reviews of others but keep in mind that, with few exceptions, all are of pretty consistent, high quality.

I thought well of Walla Walla before my trip, but after, I’m a true believer. The wines are hard to get on the east coast and maybe impossible to find abroad, but they are worth seeking out and trying if you can get your mitts on some.

I want to hear what you think! Leave a comment or question here or on Facebook and Twitter and let me and the other normal wine people know your thoughts on Walla Walla!